A copy of the college's statement is below.

In April 2015, Richard Huish college announced that from September 2017 they would no longer be accepting IGCSEs as an equivalent to GCSEs. Therefore anyone wishing to apply to the college for 2017 entry onwards would not be accepted if they had IGCSE qualifications. This not only affected home educated children but also those in private schools.

Since then, HEC along with Angela Thorn ( a home educator specialising in qualifications ) and Fiona Nicholson from EdYourself have been communicating with Richard Huish to try and get this decision revoked. The reasons for this were because the government had previously stated very clearly that IGCSEs were equivalent to GCSEs.

Today HEC received a letter from Richard Huish telling us that they will be continuing to accept IGCSEs and an equivalent to GCSEs from 2017 due to the government's announcement ( by Nick Boles ) made some time ago, to which we drew their attention.

Please note: Home educators in the area wishing to apply to Richard Huish should ensure that when entered for thei IGCSE exams from 2017, the exam centre enters them for the standard IGCSE and not the state school version, the OFQUAL-accredited 'Level1/Level2 Certificate'. This means, for example, if you are sitting Edexcel IGCSE maths, enter for 4MA0 rather than KMA0- it's the same exam but a different code. If you state, in writing, to the examinations officer that you want to take the standard, unregulated IGCSE then they should do the rest. 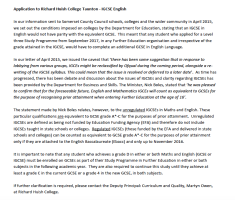